I met my future husband in August 2004. The first thing he ever gave me –apart from his phone

number- was a picture of Aqua Roma, the family narrowboat, built by Charlie Fox in 1976. Little did I realise the extent of the effect that the 38 feet 6 inches of steel would have on my life and how a boat could change it so drastically. Naturally, one of our “dates” was a few days way on the boat and from that late September weekend, I was hooked; Aqua Roma had worked her magic.

The first I realised that the V shaped nose, that makes the boats so distinctly a “Foxy,” was something that people look out for, was the following spring. We were on our honeymoon and heading up the Shroppie. The steerer of a passing boat called out to us and asked “what number?” My new husband called out “25” and as I was a complete rookie I had no idea what the conversation was about. It turned out that all of Charlie’s boats had their number welded into the steel of the front and over time, their distinctive shapes had led to other boaters taking a keen interest in what number Fox boats they had seen. Sure enough, the bottom of the cockpit had the number 25 welded on, forever to remain so, giving the boat an extra identity and Charlie a signature that would last & last. Indeed, it is such a strong niche subject, I believe that quite a few people keep a regular look out for the distinctive bow and actively record their findings.

Over the years, whilst earning my “waterways credentials” I learned a lot about the family boat. Bought as a shell in 1976, she was fitted out by Paul Hacker, my father in law, almost entirely by himself and without power tools and with copious amount of blood, sweat & tears. That fact itself makes her a special boat; being a Foxy just adds to her allure. As the middle levels were steadily cut off by the drought of that summer & Aqua Roma inched closer & closer to the centre of the river/drain outside Charlie’s old boatyard at West End in March, my father in law spent every spare hour working on her, and was in a unique position to call on Charlie for advice and to look at his other boats to see how he fitted them out. As Paul used Fox hire fleet as a template and showed such attention to detail, the result was a boat that impressed Charlie and one that he was proud to showcase as his first all steel private boat.

Since announcing on my blog that I was “Officially A Charlie Fox Boat Spotter”, I have also learned a little about the man. He was truly a waterways pioneer; he was active in the revival of the Fens for boating, preventing a low bridge being built that would cut off the Middle Levels to boaters for ever, he worked on quite a few renovation projects including the Well Creek Navigation restoration and dug out the winding hole at Whittlesey- The Middle Levels owe a lot of their existence to Charlie Fox, whose legacy ensures that a large section of the Fenland waterways are accessible to all in this present day. He was also a forward thinking business man- the drought on the Middle Level Navigations was threatening his boat hire business, so he made a deal with a farmer at Denver Sluice to allow hire boaters to use his field as a car park and the Fox Narrowboats hire fleet operated from that temporary base on the Ouse for the summer.

Recently I have been in touch with, Peter Ekins, the owner of Fox boat March Mole, number 26 the direct sister of Aqua Roma. He was told about the Fox Boatyard numbers by the previous owners of March Mole, who had their own list of boats that they had seen. By Peter’s own account, he had always been interested in keeping records and the lure of keeping detailed findings of Fox boats from number 1 to the last on the list, number 120, was just too tempting to resist- I have that list printed out and eagerly await the boating season again, just so I can look out for any Foxy boats out there and be able to fill in some of the blanks and take part in a little bit of boating history. What is it about these boats that can excite people so? As Peter himself puts it

on the cut and the fact that Charlie was such a character and well known. One early

friend …..told me “I remember him using a piece of steel rod with a door knob brazed

on for a tiller pin” and “a chain of bathplug fixed to a bent rod”.

1992 Jonathan Wilson. However, the Fox magic weaved its little spell again, as we did not know that we even wanted to buy a boat until we saw NB Ambassador, a 38 Foot Charlie Fox boat, built in 1976 (Number 28, in case you were wondering). Sadly, Ambassador was not for us- mainly because the permanent 2 berth layout prohibited the adding of another bunk for our son. As any boater reading this will know, once the boating seed has been planted, you keep going until the seed has grown into boating reality. For us, Ambassador was the seed and our boat Harebell, turned into the reality.

Ted Hughes’ verse The Thought Fox, is a poem about a fox entering the “dark hole” of the poets mind and becoming the writer. The fox is the poem & the poem is the fox 1 – The last line of the poem is “The page is printed”; the fox has entered the subconscious and the poem has been written. For me, Charlie’s story, his waterways heritage and his boatbuilding is a story about waterways and his boats becoming a part of me. My page is printed.

This is a sponsored post for Fox Narrowboats: Narrowboat Holidays and Day Boat Hire. Check out their new blog for more boating tips, advice, stories and news. http://www.foxboats.co.uk 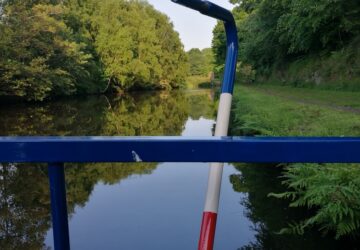 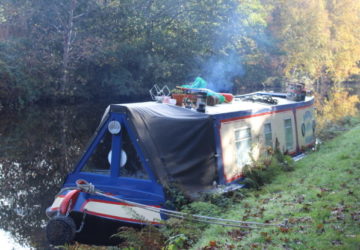 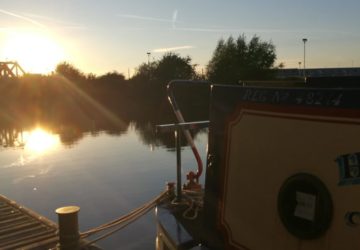