By our standards these last few trips, we had another early start. We were booked through the Tinsley flight at 8.45/9am and were a good 45 minutes away in the basin. We left at 8am and headed northwards. This time I took a few pictures of the Tyler Wilson boatyard and as we were passing the end, saw a man standing giving Harebell a good stare….we slowed down to talk to him and it was Jonathan Wilson himself!!! 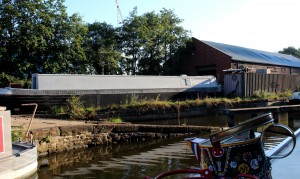 Jonathan Wilson Boats and a New Build for Some Lucky Person!!

We had a little chat and about halfway through the conversation, he remembered Harebell and told us that she was built in Stoke on Trent – It was back in 1992!!- We spoke about the advisory need for the weld in the bottom and he said “no need, we weld from the top and that won’t need doing”! He also asked how much we paid for her and nearly spluttered over his morning coffee…..”the cheapest Jonathan Wilson ever” was his reply! It was great to meet him, but we had to press on. 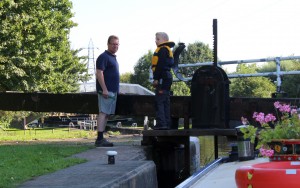 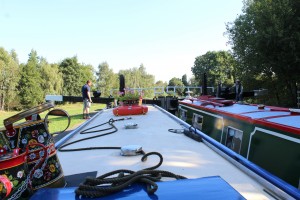 Down the Tinsley Flight

We arrived at Tinsley top lock in good time but still needed to wait for the other boat that was still in the basin when we left. We waited in the lock and fortunately, it wasn’t too long before the other boat appeared round the corner and we were off! The lockie had filled all the locks and all we had to do was steer into them, empty them and repeat! Marcus, James and the man from the other boat were on paddle & gate duty, whilst us women did the steering…..It all worked out rather well and much better than I thought that it would. One of the locks in the middle was very deep and emptied enough fro the cill to be an issue to the other boat, which was just short enough for the locks. Plus the water levels were so high that the water was tipping over the top gate……the stern of the boat got a good drenching and their back doors needed to be closed. Not for the first time I’ve been thankful for a small boat, especially in a lock. 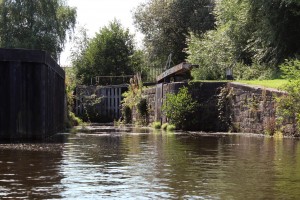 The sun shone and it was a beautiful day for boat and I lost complete track of time and have absolutely no idea how long the whole trip took us! We said goodbye to the other boat at Eastwood lock, but were soon joined by another, smaller, boat and we shared a few locks until we left them behind at Sprotborough! We were merrily cruising along in the sunshine and just did not feel like stopping- so we didn’t! Whilst leaving Waddington Lock, I got a great view of the abandoned Dearne & Dove Canal-

However, by about 5pm we were nearly in Doncaster, tired and a little bit hungry and although we’d have preferred a non-town/city centre mooring, the Visitor Moorings at Doncaster looked very inviting, so we tied up there and happily chilled out and watched the sun go down. It had been a hot day and we wanted to leave the canopy and front doors open, and we felt safe enough to do so…..All in all a great day and a lovely, cool breezy nights sleep.

Last Day of Our Journey and Harebell’s New Mooring.

This is a widget ready area. Add some and they will appear here.