Having arrived at Fiskerton on Friday night and found the moorings completely empty, we happily claimed a mooring spot. We’d not been up here since we brought Harebell back in August, but it was just as lovely and peaceful as we’d remembered. The weather this morning was not co operating and the sky was overcast, it was cold and trying to rain. However, as we were only aiming a short distance to Lincoln, we decided to just set off and deal with whatever the weather decided it would do. Stamp End Lock had a fierce overflow that rushed out from under the pontoon and bobbed Harebell up and down like a cork. We found our spot on the Visitor Moorings at Brayford Pool and spent a little time mooching round the city.

Sunday morning dawned sunny and bright and we managed to get going just after 8am, which was really 7am, due to the clocks going forward. We just missed Jacqui & Martin at Saxilby on Sukama, but caught up with them at Torksey. We wasted about half an hour having a natter over a cuppa, then headed towards the lock.

2 other boats had been booked though and they went through the lock and waited on the pontoon below for the tide to be right. The lock keeper let us through the lock 20 minutes after their departure in order to give them enough time to get to West Stockwith so we were not waiting outside the lock.

Although still sunny, the wind had got up somewhat, but with all the anticipation, we hadn’t noticed- I was just keen to get going and start the next leg of the journey! Soon enough it was our turn and Harebell & Sukama entered the lock and we began our drop down onto the Trent. Harebell always sounds different in deeper water and today was no exception, as Marcus gave her some throttle, she responded beautifully and bravely headed out onto the river.

All I can say was Oh. My. God. I was NOT expecting conditions like that. The wind was whipping up waves with white caps on them and we were being propelled along at an alarming rate, due to the outgoing tide and the wind. I have to say that Harebell was braver than I, as she took it all in her little stride and pushed on through the waves, whilst I had a mini meltdown! With windy conditions, it’s possible to find shelter around the next bend and the journey continued with a mixture of flat calm and large waves. However, sometimes we changed direction enough for the wind to be coming towards us and the waves to be breaking at the bow. Although low at the front, Harebell’s bow manages to break waves beautifully and although dramatic with water splashing everywhere, she coped.

About 5/10 mins out of Gainsbrough, we caught up with the other 2 boats, who were going incredibly slowly. Martin on Sukama was keeping with us, so we didn’t think that we were going that fast. We were faced with a decision; slow down behind them and circle at  West Stockwith, wait at Gainsbrough or overtake. As we wanted off the river ASAP, we chose the last option, although the bloke on the front boat was non to keen on our idea. Thankfully, West Stockwith soon came into view and it was time for Marcus to master the lock and he did so beautifully and Harebell still had enough power to punch against the tide and head into the lock without hitting the wall.

Stockwith is a deep lock and it slowly inched us up to a different word- a canal basin! A rarity for us river dwellers these days. It afforded some shelter, not from the wind, but from the waves. We filled up with water and pressed on for a few miles in search of a mooring- through a few double locks together and just a bit further on, some lovely piling in a sheltered spot- Perfect moorings for both boats. 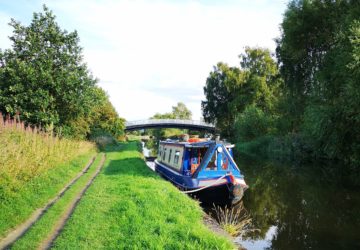 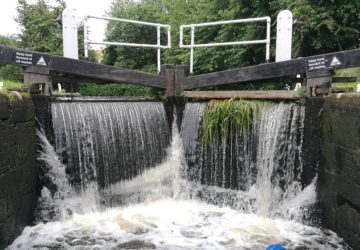